Get Immersed in Ireland

Ireland is a country rich in history and culture, and home to people who are known for being warm and witty! Ireland is recognised worldwide for its lively atmosphere, tales, landscape, and historic buildings. Northern Ireland also hosted the hugely famous cast of Game of Thrones with many of the scenes of the record-breaking show taking place across the country. If this isn’t persuasive enough, we’ve listed some other reasons on why you should come to Ireland and Northern Ireland, where you’re guaranteed a warm welcome.

One of the world’s natural wonders, Northern Ireland’s most popular tourist attraction is a must-visit for a reason. It is a truly sensational sight, with roughly 40,000 of these unusual, hexagonal-shaped stepping stones. This UNESCO World Heritage site dates back to the volcanic age, almost 60 million years ago! The Giant’s Causeway is a formation of rocks formed by a series of volcanic eruptions. Or, was it created by Ireland’s giant, Finn McCool, when he was having troubles with Scotland’s giant, Benandonner? Whether you choose to believe the science or the legend, this rock formation is breath-taking from either angle. On a clear day, you can see Scotland’s Island of Arran, though you probably can’t throw a stone into the ocean to create a path like Ireland’s mythological giant could.

If you are already heading North to visit The Giants Causeway, then you are likely venturing along the Causeway Coast anyway. This coast takes its name from the famous formation and is approximately 33 miles of beautiful coastline. Tour along in your car and you’ll find yourself stopping for many photo opportunities of Northern Ireland’s stunning coastline. For our more active holiday-goers, the Causeway Coast has four routes for you to choose from, so bring your bike!

If you’re visiting Ireland, you don’t want to miss the Guinness Storehouse in Dublin. This famed Irish tipple is said to taste better straight from the source. Learn about the production and craft of the black stuff and finish off your tour with a crisp pint that you can enjoy with a view over the city. There’s sure to be a lot to learn as to why the world’s best selling stout has become so popular over the years, with 10 million pints being sold a day across 150 countries!

Any hardcore Game of Thrones fan, and even those who have never watched an episode will know that the Dark Hedges in Ballymoney are iconic. Its feature in the vastly popular TV series has seen visits from tourists soar in recent years and any fan will appreciate the setting, it truly is a fantastical, atmospheric sight. A truly instagrammable location and one of Northern Ireland’s most photographed natural phenomena, be sure to pose for photos with caution as this road is active even if it isn’t busy.

Visit the birthplace of the world’s most famous shipwreck, the RMS Titanic. Built in Belfast, the renowned ship began its doomed journey from Southampton to New York in 1912, though it never reached its destination. If you have yet to see the movie (first of all, how?), we won’t ruin the plot for you, but this museum definitely will, so be sure to give it a watch first if you don’t like spoilers! The visitor attraction is the World’s largest attraction dedicated to the magnificent ship. Sitting only 100 metres from where Titanic’s hull was constructed and launched, you can really immerse yourself in the history of this story.

One of Ireland’s best-preserved medieval castles, built-in 1177, Carrickfergus Castle stands intact in Carrickfergus Co. Antrim. The castle has been under rule by Irish, Scottish, English and French hands since being built, and played a role in the military until 1928. Now, the castle is home to displays of historic significance and the grand venue of a number of weddings. 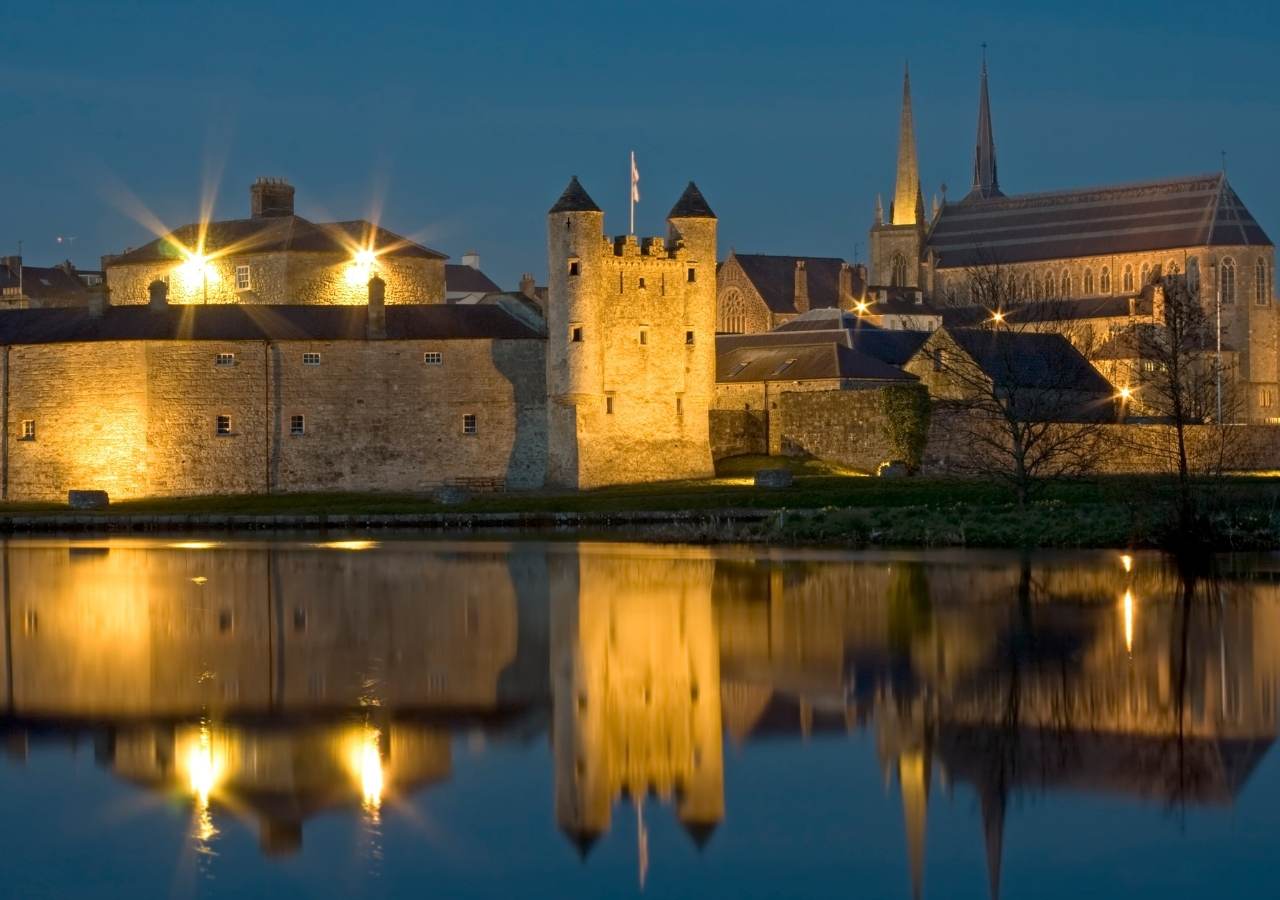 Situated beside the banks of the River Erne, Enniskillen Castle is over 500 years old and was built by the Gaelic Maguires as a guard to one of the passes to Ulster. The castle has been historically significant in military strategy and is now home to Fermanagh County Museum and The Inniskillings Museum. The local area of County Fermanagh is a picturesque backdrop to the castle. You can book a tour with Fermanagh County Museum and then go enjoy some delicious refreshments in the cafe.

The oldest licenced distillery in the world, the Old Bushmills Distillery is certainly worth a visit whilst you’re in Ireland. For over 400 years now the whiskey distillers have kept to their distilling traditions, this is definitely worth a visit from a whiskey fan! Made, matured and bottled on-site, Bushmills offers tours so you can really see the highlights of the process. This distillery has stood strong throughout history and a visit there is sure to show you why!

First erected by salmon fishermen in 1755, venture across the Carrick-a-Rede rope bridge, onto the Atlantic islands where just one building, a fisherman’s cottage, is nestled. Sitting 100ft above the ground the dramatic cliffs certainly make for an adrenaline-fueled bridge crossing.

Get out into nature in Northern Ireland with a visit to Glenariff Forest Park. Covering over 1,000 hectares with planted woodland, lakes, outdoor recreation spaces and conservation areas, the rocky gorges of the river support a wide range of mosses, liverworts and ferns. The woodland has areas for picnic and barbequing making this forest park a great day out for the whole family.