Visit the Glorious City of Glasgow

If you are planning a trip to Scotland, a day spent in Glasgow is one that is full of a unique culture that you won't find anywhere else! Edinburgh might well be the nation's capital but Glasgow offers a sense of belonging that is unrivaled by other cities of its size.

Out With the Old and In With the New 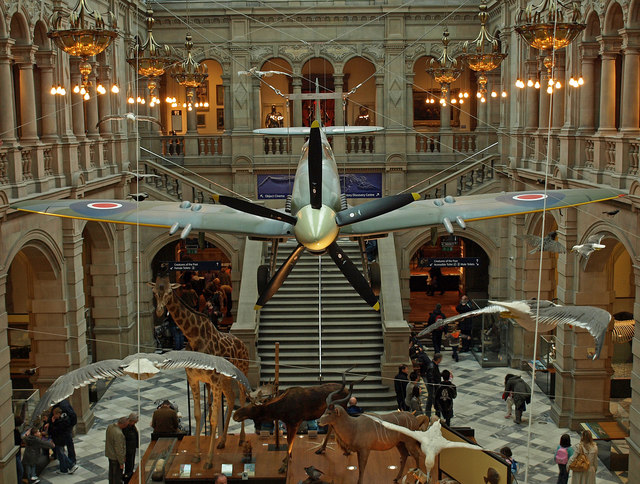 Start the day with a walk in the park to the grand red sandstone building that houses Kelvingrove Art Gallery and Museum. Half history, half art there is certainly something here for everyone. There are 33 different galleries – you’ll find all things from a  giant elephant to a World War II Spitfire as well as dinosaur eggs, historical artifacts and paintings by various artists. Also look out for the famous eyes of TJ Eckleburg (Great Gatsby fans will know exactly what this is). With more than 8000 exhibits there’s plenty to see, and what’s even better is that entry is completely FREE! In fact, all of Glasgow’s council ran museums are free of entry.

From Kelvingrove, take a walk to the University of Glasgow. The buildings were designed by Sir George Gilbert Scott. With its turrets and bell towers, many students and visitors think it resembles the wonderful wizarding school of Hogwarts. For one day you can feel like Harry, Ron, and Hermione. Whilst you’re here, visit  Scotland’s oldest museum – the Hunterian

.It was set up when 18th-century anatomist William Hunter donated his scientific collection to the university along with many coins, books and Roman artifacts he collected over the years.This is also free of entry for all, however, there is a small charge for those going to special events/exhibitions. 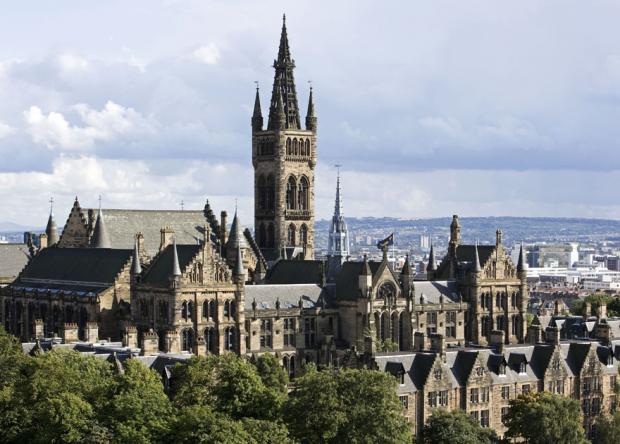 Glasgow and the Clyde

If you’ve not spent all day in Kelvingrove Museum or touring the University of Glasgow then perhaps tighten your shoelaces up because a walk down to the Zaha- Hadid designed  Riverside Museum may be your next stop. This museum has around 3000 travel and transport related exhibits. So there’s plenty for all to see, including the wonderful steam trains and a recreated street depicting Glasgow city life in the 1890’s (fascinating stuff!). And just outside the museum, you can take a tour of the

The Glenlee. This tall ship was Clyde built and is still afloat today, in fact, the Glenlee is actually one of five that still remain today. 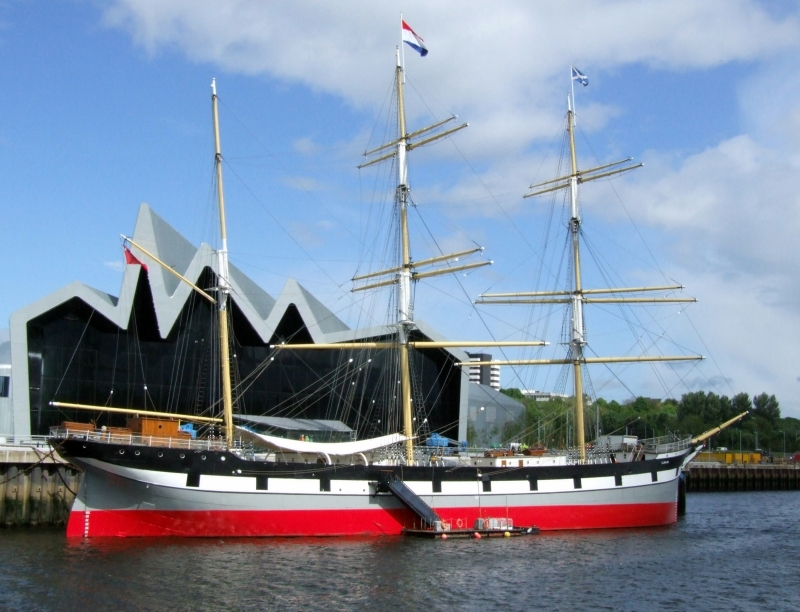 'Glasgow built the Clyde but the Clyde built Glasgow' is perhaps a phrase that perfectly highlights the significance of the River Clyde to the city. The River Clyde is simply not just a river, it is something more. During the reign of Queen Victoria, the British Empire was established and Glasgow, in particular, was flourishing with industry, the city was a fully functioning powerhouse. This is because Glasgow had the Clyde and on the Clyde, ships were built which could allow the transport of goods such as tobacco to the Empire. Scotland during this age heavily relied on the industrial trade links with the Empire.However, the Empire also brought across many immigrants from the likes of Italy, Lithuania, and Ireland. Without the likes of immigrants, many things associated with our culture today would not be present, for example, ice cream. After the Second World War, the area went into decline. Since then it’s been redeveloped and as you walk along the River Clyde you’ll various examples of modern architecture like the SSE Hydro, the Clyde Auditorium (known as the Armadillo) and Glasgow Science Centre.  But there’s still a part of the river’s old life that remains the Finnieston Crane 175-foot high crane used to load heavy locomotives onto ships. 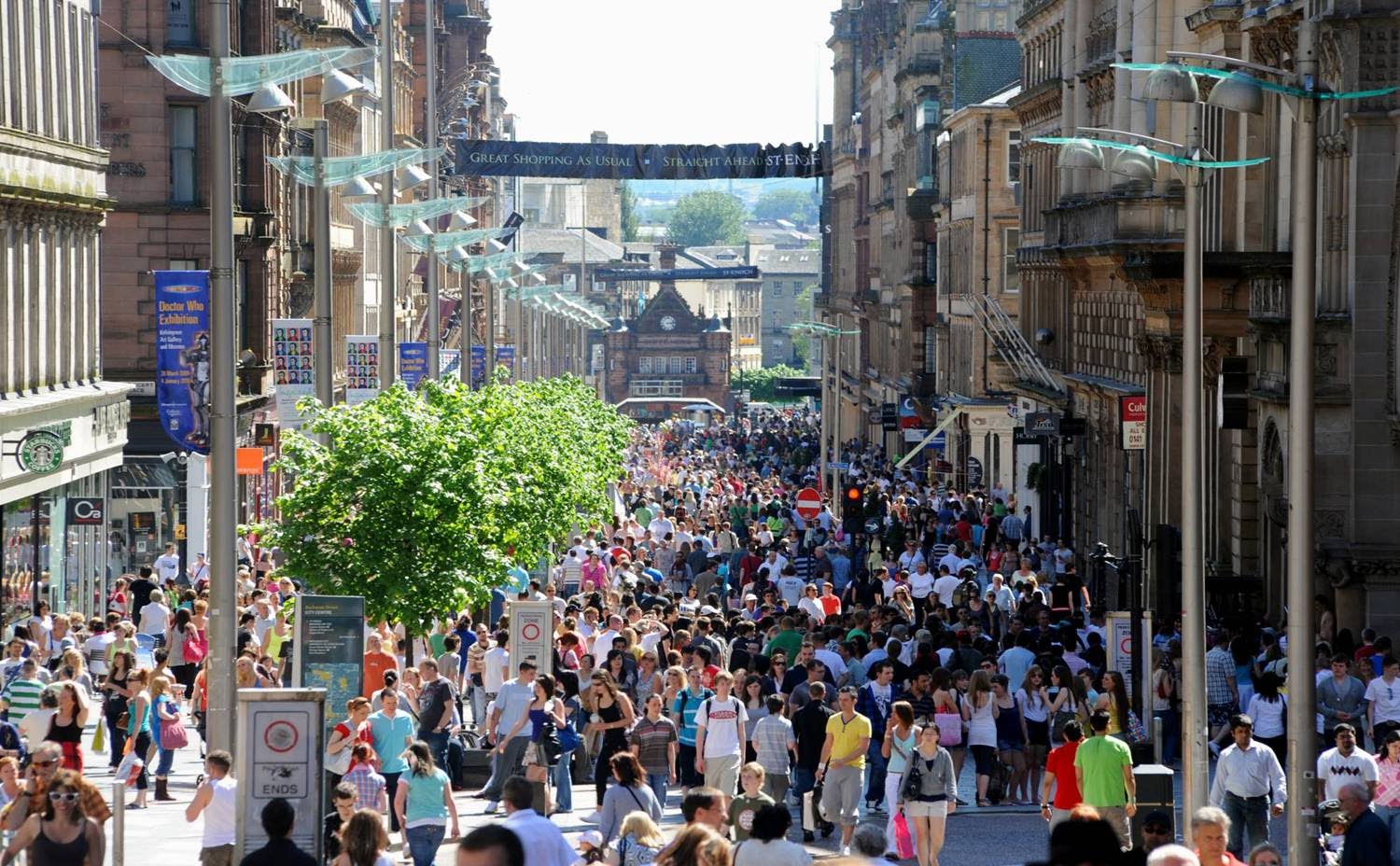 A Spot of Shopping

Now perhaps sightseeing is really not your thing but shopping, on the other hand, is, well Glasgow is perhaps the best place (in Scotland for you!). With over 1500 shops, Glasgow is a shopper’s idea of heaven. The most well-known brands and major retailers can be found in Glasgow's Style Mile. There's a terrific selection of outlets in Glasgow's Style Mile with malls, independent boutiques, designer stores, and one off-specialty shops including Buchanan Galleries Buchanan Quarter, St Enoch Centre, House of Fraser, Princes Square and more.The Style Mile houses over 200, shops are open until at least 7 pm every Monday, Tuesday, Wednesday, and Friday and on a Thursday most stores are open until 8 pm.  In Glasgow, you will have a shopping experience unlike no other because there’s just so many shops to venture into.  You can certainly shop till you drop here! 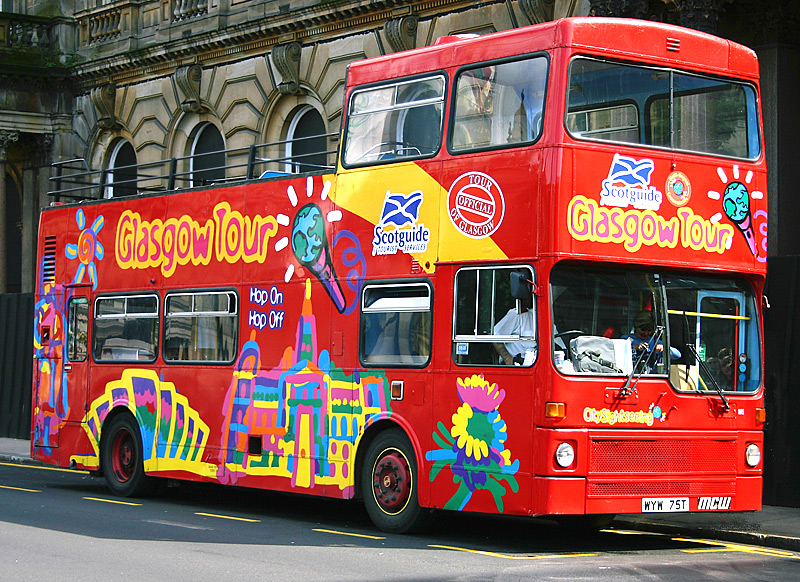 Hop On the Big Red Bus

So let's say you’ve conquered your first few days in Glasgow and perhaps all of the walkings has left you a little bit more on the legs. Well, fear not because Glasgow has its very own sightseeing bus tours. The open top bus tours are an absolute smash hit and it is very easy to see why. Open from 9:30 am – 4:30 pm every day and with tours commencing every 15 minutes. The open-top bus tour is the perfect way to discover Glasgow as you are taken to all of the main attractions such as Glasgow Green, the Riverside, the West End, the People’s Palace and much more. There are 21 stops in total and the duration of the full tour (without the stops) is around a 1 hour and 20 minutes, however, you are free to simply hop on and off at any of the stops as the next bus will pick you up so the tour can continue. 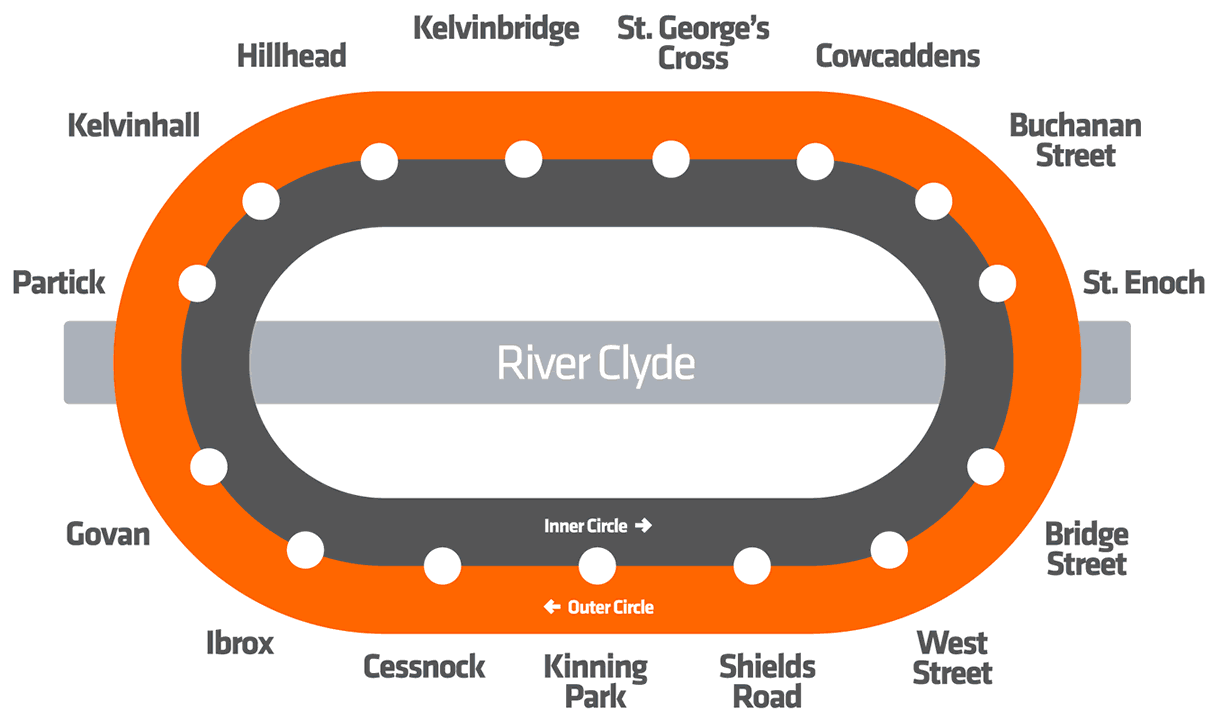 Opened on 14th December 1896 Glasgow Subway is the third oldest underground metro system in the world, after the London Underground and the Budapest Metro. Running every four minutes at peak times, it takes just 24 minutes to complete a full circuit of the fifteen stations and costs from as little as £1.45 for an adult single to travel anywhere else on the system. The underground is a fantastic quick, easy and affordable system for all visitors to the city and of the course the locals going to work and university.

A Bite To Eat

Eating out in Glasgow should not be a problem as there is a variety of restaurants dotted all over accommodating to all taste buds and dietary requirements and those who are very indecisive! 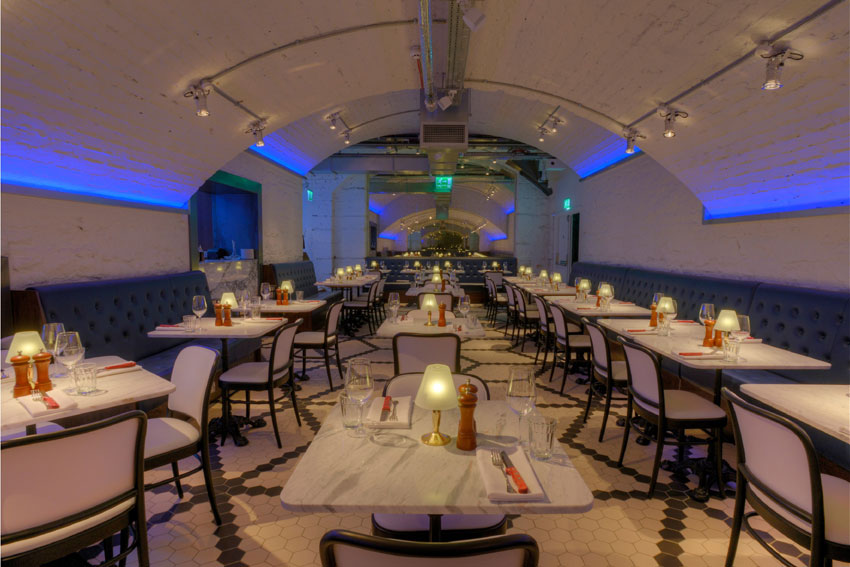 For central dining, there’s the Alston Bar and Beef, situated underneath Central Station. Here the main specialty is beef and in particular steak from the Scottish Borders. There is also gin tasting too. Another restaurant, only a 10 minute walk away on St Vincent Street is Bread Meats Bread. The food portions here are very generous so pop round for a meal that will certainly not leave you hungry. As of last year, they won Scotland’s Best Burger 2016, Yelp’s ‘Top Place to Eat in Glasgow 2016’ and many more. The restaurant above is Alston Bar and Beef.

If you're in the West End, then stop for lunch at the Ubiquitous Chip where they put a modern twist on traditional Scottish dishes and you also dine in a courtyard filled with flowers and all sorts of greenery. It’s perfect for those who willing to try something new and exciting! Or Fanny Trollopes (don’t be fooled by the name!).  Here you can enjoy some of Scotland’s finest seasonal produce in a friendly atmosphere. The backstory of the beginning of the restaurant is utterly charming. The menus are constantly being updated and if you can’t see anything that you like on the menu the chef’s will be happy to cook something you will, within reason of course!. The restaurant above is the Ubiquitous Chip.

Of course, there are also various chain restaurants such as Nando's in the St Enoch Shopping Centre and Sauchiehall Street (pronounced socky-hall),

Wagamama in West George Street and Handmade Burger on St Vincent Street. So there’s plenty of choice for all taste buds and budgets on offer!

A Place To Stay 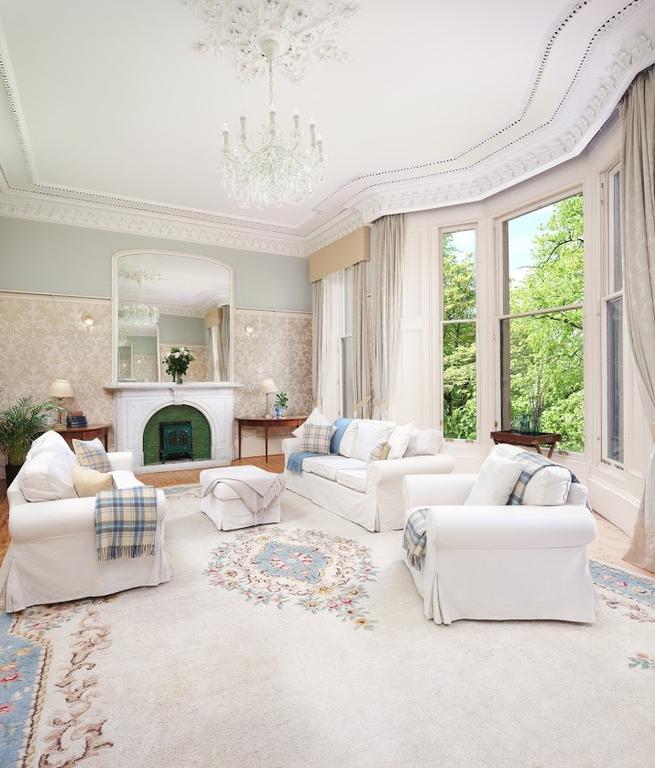 Finally, if you've got this far then I've got one more thing to show you and that is our property, Crown Gardens.

If you’re planning on staying in style and with your friends then definitely book a stay at Crown Gardens.The property is located in the West End of Glasgow very close to Byres Road, the heart of Glasgow’s West End and home to some great boutique and vintage shops. The interior of the property itself almost represents the city as it's combined the high ceilings and decor of an earlier era with contemporary kitchen and bathrooms much like Glasgow does with its stunning architecture and modern advancements. Entering into the large entrance floor, many of the property's period features are apparent, including the Delft ceramic stove, original cornicing and working shutters and a grand staircase.

Just off the entrance hall is the TV room with a 50” HD Sony TV with surround sound and comfortable couches, beanbags and an electric wood burner effect stove. There is a double bedroom on the ground floor with adjacent cloakroom and shower. On the first floor, just off the stairs, is a cloakroom and children's play area, a large, sitting room with great views over the front of the property. There is an electric woodburning stove as well as large radiators. The kitchen/dining area is fully equipped with all of your kitchen necessities.  The separate dining room seats 10 guests. The second, 'bedroom' floor comprises the Master Bedroom with en-suite shower room, 2 further double bedrooms, and 1 twin room. The property has a private rear garden and overlooks a leafy park to the front of the property.  The image above is a sneak peak of the living room of the property. If you want to see more then simply click this link http://clickbookstay.com/property.cfm?propertycode=195562.

And that, my friends, bring us to an end I hope I have given you some inspiration to visit the glorious city of Glasgow.

P.S ClickBookStay look forward to welcoming you to upon your visit!